Inaugural 24 Hours of Le Mans Virtual winners Williams Esports, running in this year’s race as Rebellion GPX Esports, were beaten to the win in the 2022 edition by Realteam Hydrogen Redline.

Behind the wheel of the winning team were Formula E’s Oliver Rowland and Formula 2 driver Felipe Drugovich along with simracers Jeffrey Rietveld and Michal Smidl.

In qualifying it was Rietveld who took pole position for the team, beating Formula 1 world champion Max Verstappen in the sister Team Redline car by 0.002s.

Verstappen also started the race for the #123 car and took the lead of the race on the opening lap just after exiting the Dunlop chicane.

The world's most challenging esport race is underway. Enjoy the action from wherever your are watching on the planet.

From there the Dutchman pulled out a gap over the cars behind until just over seven hours into the race where he lost control of the car entering the Ford chicane and crashed into the tyre barrier.

The hit was enough to take the rear left tyre off the car and force the team to retire. 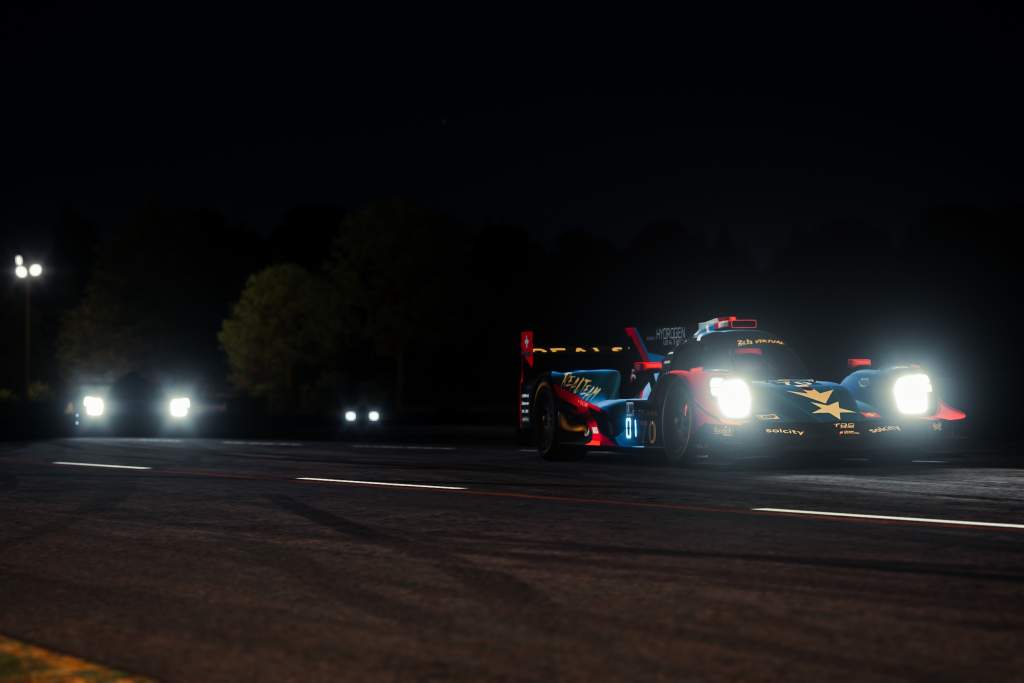 They weren’t the first frontrunning LMP team to retire as Mercedes suffered a blown engine less than three hours into the race due to a double downshift by sometime DTM race winner Dani Juncadella.

Another team that was in contention for a place on the podium was Veloce Esports whose four-driver lineup includes World’s Fastest Gamer winner James Baldwin. The crew was running in third place with three hours to go until they ran out of fuel.

Le Mans can be a cruel, cruel place

The Oreca machine has ran out of fuel⛽😟 pic.twitter.com/BuCKo3e98N

Ultimately it was Floyd ByKolles-Burst rounding out the podium one lap down the winners, its crew featuring Tom Dillmann, Jernej Simoncic and Jesper Pedersen, who all finished second overall in the previous 24 Hours of Le Mans Virtual, along with Bent Viscaal.

In the GTE category it was a familiar battle out at the front with Team Redline and Coanda Simsport fighting between themselves for the class win.

One of Coanda’s entries, the #92 car, was taken out of the race with nine and a half hours to go after contact with one of the LMP cars. Tommy Ostgaard was driving the Porsche Esports Team-branded Coanda entry at the time and he was hit by Nicolas Varrone in the Panis Racing car, which sent Ostgaard into the tyre barrier at high speed. Varrone was given a drive-through penalty for the contact.

The reigning GTE championship car is OUT! 😲