He may have begun his season with a ninth-place finish and not led the standings until the final round, but Frederik Rasmussen was a worthy winner of the Formula E Accelerate esports championship and the prize real-world test that comes with it.

The Red Bull Esports ace is best known for his talents on Codemasters’ F1 games, where’s he finished as the runner-up in the drivers’ championship in both of the last two years. More importantly – in terms of how the $750,000 prize pool is distributed – Rasmussen has helped Red Bull to back-to-back teams’ championships.

The Dane has become a mainstay of F1 Esports, having participated in every season since the series’ inception in 2017.

That doesn’t mean he’s exclusively raced on that game or that his talents are limited to F1 Esports. He was a part of the four-driver team that won the 2017 iRacing Blancpain GT Series and more recently he was victorious in the GTE category in the 2020 iRacing 12 Hours of Sebring.

“You’re not going to be at the top of F1 Esports and then not be able to drive another game” :: Frederik Rasmussen

However, prior to racing in FE Accelerate – the all-electric championship’s latest virtual series – Rasmussen only had around 15 hours total experience on the platform that the series was using. The practice he needed to put in for the open qualifiers and then for each of the six races means that gameplay time has shot up to over 200 hours.

“My experience with rFactor 2 was basically nothing,” Rasmussen told The Race. “I had a race I did three years ago, so I don’t remember anything from that.

“So I was pretty much new to the game when I started Accelerate.

“Maybe three or four days after I started practising is when I finally got some good pace after doing a lot of hours.

“It’s completely different to F1 2020. You have to be more careful on the brakes, the bumps really upset the car a lot more and then there’s the sliding – you have to slide through hairpins and tight corners to get the rotation and the lap time.

“For me, I’m coming from iRacing, that’s where I started, so I’ve always been switching games and I’m fairly good at adapting so it was kind of normal for me. But you’re not going to be at the top of F1 Esports and then not be able to drive another game.”

Rasmussen had an underwhelming start to his time in FE Accelerate. He qualified down in 16th place for the season-opener at the virtual New York E-Prix venue, and could only climb to 10th place in the race – which became ninth when fellow Red Bull driver Graham Carroll was hit with a post-race penalty.

From there, his pace improved massively as he finished on the podium in all of the remaining races and took his first win in Diriyah. His points tally was key to Dragon Penske ending the series as the runners-up in the teams’ championship – matching the real-world’s team efforts in the inaugural Formula E season.

Heading into the championship-deciding final round, Rasmussen was 26 points behind Erhan Jajovski – a leading light for Romain Grosjean’s esports team – who had been at the top of the drivers’ championship since the first round.

What reignited Rasmussen’s title chances was the fact that the grand final was worth double points and when he secured pole position and the bonus points that go with it, he reduced the deficit to Jajovski to 20 points.

A faultless race where he led every lap and won was almost enough in itself but, with Jajovski starting the race in third, Rasmussen had to set the fastest lap to guarantee he’d outscore Jajovski enough to take the crown. 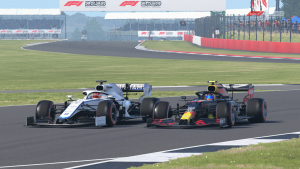 Ultimately Jajovski’s own pursuit of setting the fastest race lap time ended up with him crashing into a wall and subsequently falling to fifth, which all but ended his championship chances.

One key factor was Rasmussen’s Red Bull stablemate Carroll having his best qualifying performance of the season as he split the title rivals on the starting grid at the Rome circuit.

If Jajovski had started and finished the final race in second then he would’ve still maintained his points lead and scooped the top €20,000 prize and the real-world Gen2 test.

Despite officially racing for Dragon Penske and Virgin respectively, the Red Bull Esports pair of Rasmussen and Carroll helped each other before and during the final round, with the Scotsman proving to be pivotal to the championship’s outcome.

“Me and Graham Carroll were practising together all the time for FE Accelerate. We already made a plan before the race about what we were going to do and we did it perfectly,” Rasmussen said.

“We made a plan for Turn 1 because after Turn 1 there’s basically nothing you can do in terms of overtaking.

“I was going to leave Graham the inside of the track so that he could brake late, I would take the outside and then we were able to hold the 1-2 until the end.

“I practised qualifying way more than the race, I do the same in F1 Esports as well where qualifying is the main thing. For the last race in FE Accelerate, I might’ve only done two or three test races and the rest is just qualifying all the time.

“I definitely didn’t expect the championship, being so far behind, but with the qualifying and the race [giving double points], it was possible to have a race like this.

“There was not much pressure on me so I just went there, had some fun and saw what happened – and I got lucky.”

In retrospect, the title fight coming down between Rasmussen and Jajovski was fairly predictable given that they were the fastest two drivers from the open qualifiers and the only other driver who made it onto the grid via that route was Manuel Biancolilla.

All of the remaining 21 drivers were selected by their respective team, although many of them ranked highly in the open qualifiers such as F1 Esports champion Jarno Opmeer and Virtual 24 Hours of Le Mans winner Nikodem Wisniewski.

Here it is, the fastest lap from the qualifier 💦💦 pic.twitter.com/wQJPnHBLJD

Rasmussen joins fellow Accelerate race winner Kevin Siggy in securing a Gen2 test drive as Siggy is still yet to have had his for winning the Race at Home Challenge last year.

It’s not yet known where or when either will finally get their turn to prove their virtual skills behind the wheel of the real thing, but it’s something that Rasmussen is eagerly anticipating since he currently has next to no real-world race car driving experience under his belt.

“I’m very excited, it’s something I’ve been waiting for years for an opportunity like this,” Rasmussen said.

“I have no idea how it’s going to go but I’m going to try my best in the real car. It’s my first time trying it.

“If I could pick… I watched an onboard of Valencia and it looks like a real race track without walls and stuff. So it would be a nice, safe option for my first time.”

With less than two months until F1 22 is released, The Race got a look at some of the new features that will be included in the game - the the second since long-time developer Codemasters' takeover by EA