Gary Anderson: When young F1 team-mates don't get along - The Race
Skip to content
Formula 1

Gary Anderson: When young F1 team-mates don’t get along

Though the Jordan team always championed young talent, it only ran one all-rookie Formula 1 pairing and was under different ownership by then.

So it was rarely in the same territory Haas is in going into the 2021 season with two complete F1 novices, but it did often have two drivers with very few grand prix starts between them.

And two of those occasions were among long-time Jordan technical director Gary Anderson’s favourite times with the team:

During my time in Formula 1, I always enjoyed working with motivated, inexperienced drivers with something to prove. At Jordan in particular, I was fortunate enough to work with several of them.

Two partnerships stand out – Rubens Barrichello and Eddie Irvine, who teamed up from late 1993 through to the end of ’95 and Giancarlo Fisichella and Ralf Schumacher in 1997.

When Eddie Irvine joined Jordan for the 1993 Japanese Grand Prix, as a company it was a strange time.

We’d had a great season with the 191, then a dismal one with the Yamaha-powered 192 and we were still trying to find our feet again.

Rubens Barrichello had been with us for the full 1993 season and had endured a lot of pain with various drivers as his team-mate – Ivan Capelli, Thierry Boutsen, Marco Apicella and Emanuele Naspetti – so there was no continuity.

When Eddie joined for Suzuka, his experience at the track from racing in Japanese national series stood him in good stead and he finished sixth behind Rubens after famously unlapping himself on Ayrton Senna.

Eddie was a bit of a character, so that was difficult for Rubens to take, but he accepted it as the true professional he is and got on with the job.

They didn’t really get to work together properly until 1994. Eddie’s incident at Interlagos, which earned him a one-race ban that was extended to three races after an unsuccessful appeal, and then Rubens’ accident at Imola and the death of Ayrton Senna disrupted the season hugely. 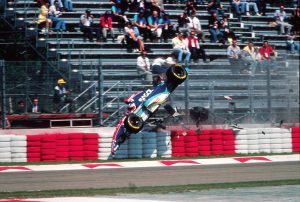 When we got back to some kind of normality, with the two of them being on more or less the same level there were fireworks. Neither liked being beaten by the other.

Rubens was a ‘fingertip’ driver, who allowed everything to flow and let the car do its thing. Eddie was more of a ‘white knuckle’ driver, always reacting to everything that happened. So they both wanted the car to be a bit different as far as the set-up was concerned. Rubens was happy with the car moving around, so wanted it a bit softer, but Eddie wanted it reactive and therefore stiffer. Neither was wrong, they were just different.

Neither driver would give up. They were of more or less equal talent and both driving for their F1 futures. If they were together on the grid, it didn’t matter what you said to them –  you just had to hope one of them would make a much better start than the other to avoid the risk of contact.

After they came together in the Hungarian Grand Prix in 1994, I had to get them together and request (being polite, as you can imagine!) them to sort it out between themselves. As you would expect, that didn’t happen but the positive was you could always be sure they would give it their all. Sometimes more experienced and comfortable drivers didn’t.

I have always like working with young drivers because they are more open-minded. I engineered Rubens’s car in 1994 and we got on very well – he was always open to set-up suggestions.

Eddie was a bit more of the old school, where the driver would lead the engineer. Interestingly, it was Andrew Green – now Aston Martin’s technical director – that engineered Eddie’s car and on many occasions I would find him with his head in his hands, wanting to go the scientific route but knowing that Eddie wanted to go the Eddie route!

Both of them would give it their all. Every time in the car they would wring its neck and, as an engineer, that’s all you can ask for. There was none of this ‘when I was at ‘x’ team they would have done this or that’.

There was a difficult period when Rubens started to think that we were all on Eddie’s side. With Eddie Jordan, Irvine and myself all being Irish and Ian Phillips (the commercial director) being Irvine’s mate, Rubens started to feel a bit outnumbered and started to lose his way for no reason.

I took him aside one day and, in my own delicate way told him it was time for him to grow up and leave his entourage behind and make his own decisions!

I said ‘you have people to book your flight, rental car, hotel and set your alarm – how can you make a decision when to brake when you arrive at the first chicane in Monza if you never make any of the other mundane decisions in life?’ He took that on board and in future came with fewer people.

But overall, they were a good combination and over the 1994 and ’95 seasons had a lot of good results. It says a lot that both went on to win grands prix for Ferrari.

After Rubens left the team to join Stewart in 1996, we ran Giancarlo Fisichella and Ralf Schumacher in ’97.

Giancarlo had a few races the previous season with Minardi under his belt, while Ralf was a rookie and came in after winning the Formula Nippon title in Japan.

When it comes to how they worked together, the best way to put it would be to say that they didn’t!

They were completely different people and never really hit it off. The coming together in the Argentinian Grand Prix, when Giancarlo made a mistake then at the next corner Ralf tried to pass him, potentially cost us a victory given the way the race panned out. But this sealed the deal in terms of them not getting on.

Fisi’s engineer, Andy Tilley, would be very secretive in meetings and Ralf’s engineer, Andy Green, was the opposite, laying everything on the table. Once Ralf got to understand this, he started to keep things to himself as well.

Both were very good drivers in their own right. Like the Rubens/Eddie combination, Fisi was the ‘fingertip’ driver, very precise and needing a car that was well-balanced and could carry high minimum corner speed. Ralf was the ‘white knuckle’ driver, trying to muscle the car to his liking, braking very late and turning the car in hard on the throttle. He used a little left-foot braking too, which I will come back to later.

The main problem was that they were both at the same time in their careers. Any time you get that you are going to have fireworks of some sort. Fisi was quite weak in terms of mental strength and Ralf was the opposite, so on most occasions Ralf was able to beat Fisi down and hurt his confidence. I think you could see that in Fisi’s career in general.

But as with all young drivers, they certainly gave it their all. With younger drivers, you know very quickly if they have what it takes to be a winner even if we didn’t necessarily give them the tools.

But you can very quickly pick up if they are making the best use of what they have and how confident they are in what they are doing.

Yes, they might visit the kitty litter a little more often but that’s acceptable because when they do it you know they are wringing the car’s neck. 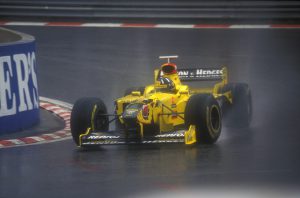 They always wanted something from the car that we couldn’t give them and that seemed to affect the younger driver as they thought they were missing something. Instead of just driving the wheels off what they had, they started to chase the impossible.

Coming back to Ralf, he had the added problem of being Michael Schumacher’s younger brother. He had a lot to live up to and everyone expected him to be the second coming, which meant he’d try to do anything Michael could.

Left-foot braking was the in thing and Michael used it to finesse the car into and through a corner but Ralf used it like you had just thrown out an anchor!

To give Ralf some mileage, we were testing at Magny-Cours at the end of 1996 and suddenly a new problem cropped up – we were breaking gears.

After having a close look at the data we were amazed to find that Ralf was able to go though Turns 1, 2 and 3 without lifting. He would keep the throttle flat, stand on the brake pedal with his left foot and change down three gears, and after a few times of doing this the gearbox would let go.

In this case, it was the gearbox but in general he would have twice the brake wear of Fisi and much higher brake temperatures.

But again, we still had a good 1997 season with the pair with both taking podium finishes – even though I suspect that had Rubens stayed on, the car was good enough to have won a race or two.