How Alfa Romeo's virtual F1 champion is getting on at Mercedes - The Race
Skip to content
Formula 1, Gaming

Heading into the 2021 F1 Esports Pro Championship, reigning champion Jarno Opmeer will be looking to become a two-time champion, a feat only previously accomplished by Brendon Leigh.

The difference is that the first of Leigh’s titles came in the inaugural F1 Esports season which is unique in having had a knockout tournament format. Ever since F1 Esports adopted a more conventional championship format in 2018 no driver has been able to retain their title.

Leigh won in 2018 before ending the following season fifth in the drivers’ championship as Ferrari’s David Tonizza topped the table. Then in 2020 it was Opmeer who was crowned the champion and Tonizza could only take seventh in the points standings – he was, admittedly, hampered by technical issues last year, most notably at Canada when his car rolled over after contact with Opmeer when a glitch meant the latter wasn’t able to see Tonizza on his screen.

Regardless, both Leigh and Tonizza – team-mates at Ferrari this year – haven’t been able to win in two consecutive championship seasons. Opmeer is confident though that he can succeed where those two have failed.

“I’m of course going to try and break that trend!” Opmeer tells The Race. “I’m definitely not planning to finish in P6 or P7 – that’s not me.

“So I’ll try to do better than both Brendon and David did after their championship wins. But staying at the top is very hard, especially in esports where two games are not going to be the same. 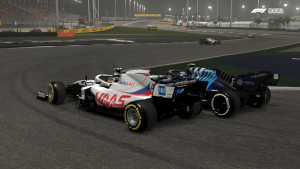 “You have to keep an open mindset to new things, which is hard if you’ve done a lot of hours on one game and then have to switch to another.

“But I think I’m used to adapting myself to other types of cars and tyres from my real-life racing but also from driving on different simulators, so I think I might have a slight advantage over those guys on that side of things.

“I am confident of course but at the same time I should be questioning myself because it’s very close and every hundredth of a second is going to matter.

“So we need to get everything out of it if we want to win again and that’s not going to be easy.”

Mercedes dominated the constructors’ championship in 2018 as Leigh and Dani Bereznay took the top two spots in the drivers’ standings whilst racing for the Brackley-based outfit. 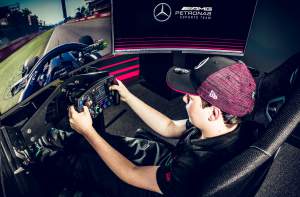 Since then the team’s record hasn’t been great as it was eighth of the 10 teams in 2019 and improved to fourth last year. With the $750,000 prize pool being distributed according to the constructors’ championship placings, it’s a major consideration for all of the F1 Esports drivers.

“In 2018 Mercedes was very dominant in F1 Esports but I think they were just ahead of the game compared to everyone else,” Opmeer – who has now swapped to Mercedes – says.

“That’s what we’re trying to do now as well but the level has increased a lot since then and that makes it harder to be ahead of others.

“So it’s going to be very tough to win the championship, it will be very tight.”

The switch to a more involved and professionalised environment has been beneficial to Opmeer’s overall performance.

“So far at Mercedes it’s been a lot better, we have two engineers constantly working to see what we can do better,” he adds.

“Last year [at Alfa Romeo] we were not completely on our own but we were left a lot more on our own than now at Mercedes where we have a lot more resources to play with.

“Also last year I did everything from home but now I pretty much live at the Mercedes factory so it’s a pretty big change.

“In the beginning it was a bit scruffy as we had our different ways of doing things, myself and the team, but eventually we’ve been able to get the best out of both of us.”

Along with a new team, Opmeer has also got two new team-mates in the form of Dani Moreno and Bono Huis.

Huis has had a presence in F1 Esports since 2018 but most recently he’s been representing Mercedes in rFactor 2-based open-wheel racing competitions.

Wrapping up both Championships with a clean sweep for @bonohuis in the @rFactor2 Formula Pro Series with six wins out of six! 👏 pic.twitter.com/0hvpUqOLqX

In the run up to the F1 Esports Pro Championship Huis has been in more of a support and advisory role to his two team-mates.

Moreno may be the least well-known of the three but he’s a smart signing by Mercedes since he was named the rookie of the year in F1 Esports last season and for good reason.

He took a surprise second-place finish at Silverstone and scored points in four of the five remaining races. All of which meant Moreno ended the season eighth in the drivers’ championship and only nine points shy of Tonizza’s total.

More recently Opmeer and Moreno have been working together in the PSGL league run on F1 2021. In a field full of other F1 Esports drivers, Opmeer won the drivers’ championship, while he and Moreno secured the constructors’ championship for Mercedes. Both titles were earned with a race to spare.

Congratulations to the @MercedesAMGF1 driver on another stunning campaign 👏 pic.twitter.com/PilGYJNwJo

Despite this incredible success in league races for both himself and Moreno, the defending F1 Esports champion is hesitant to read too much into that and believes not everyone was going as fast as they could have done in PSGL.

“League racing is much more relevant this year than it was last year as there are a lot more F1 Esports drivers participating,” Opmeer explains.

“Lucas Blakeley joined, Frederik Rasmussen’s been doing it a little bit more often, Sebastian Job and Joni Tormala are both driving all the time and those are pretty fast guys of course and probably fighting in the top five or 10 consistently.

“But PSGL is not a very good benchmark as I reckon some people were sandbagging in some qualifying sessions and some were not.

“So it’s tough to say and in F1 Esports there will be a lot more pressure of course. It will be interesting to see if some people lose performance compared to PSGL when under that pressure.”

Red Bull’s Rasmussen could easily be described as the nearly-man of F1 Esports as he finished third in the drivers’ championship in 2018 and then as the runner-up in the two most recent seasons.

The Dane took part in just two races in the latest season of PSGL and won one of those races – the Belgian round, where he took the chequered flag nearly four seconds ahead of Opmeer in second place.

Stunning drive and a timely reminder not to underestimate him ahead of #F1Esports #PSGLS29 🇫🇷 pic.twitter.com/zWmx0NCWD0

When asked who he sees as his biggest threats to this year’s F1 Esports Pro Championship drivers’ title, Opmeer only named one person and it was Rasmussen.

“He is the only one I’m a little bit worried about as he’s simply always there at the top,” Opmeer admits.

“Last season and the season before he finished P2, in 2018 he was P3 so he’s been consistently up there and he is incredibly rapid so it’s not going to be easy to beat him this year. I feel like he’s getting stronger every year as well.

“But we will have to wait and see and we are going to try and beat Red Bull this year in the teams’ championship as I think they are our main rivals and it won’t be easy to beat them.”

4 hours ago IndyCar No Comments